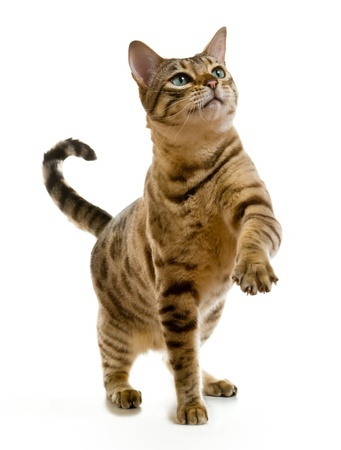 Have you ever thought that maybe it’s not you, but your cat who has the dominant role in the house? You might not be far from the truth.

Recent studies suggest that cats adopt a dominant role in the absence of a predator or other threat, as often is the case for a cat who lives inside the typical home. As a result, they assert themselves as the chief animal, and some of their strange activities may be ascribed to their self-appointed leadership positions.

For example, in “Cat Sense,” a book released by British anthrozoologist John Bradshaw, he asserts that cats essentially think of people in the home as other, larger, dumber cats. In fact, Bradshaw suggests that cats see people as almost like mother cats or even just as nonaggressive larger cats who cohabitate in the same home, notes The New York Times in its review of the book.

Another way that many believe cats show their dominance is with bringing home dead animals. Mice, shrews, even butterflies and small rabbits in some cases have found their way into the homes of cat owners by way of their furry friends’ mouths and claws. Traditional thinking has been that this was done to show off their hunting prowess, while others say that cats do this to ensure their owners don’t starve. When house cats don’t see their human companions killing any prey, returning a fresh kill to the home to share is their way of ensuring that their bipedal masters with poor hunting skills survive and remain fed.

Bradshaw refutes this, saying that instead this is an activity based on cats’ wild nature. As they often hunt based on the scent of mice and other animals – sometimes where multiple other cats may also be hunting – returning home with the catch is meant more as a way for cats to secure their captured meal and enjoy it at peace … with their owners around the dinner table, of course!

A final way cats show dominance is in the litter box. If your cat leaves their business uncovered, it’s a sure sign that they are asserting themselves as the lead animal of the home. In the wild, dominant cats in colonies leave their feces uncovered as a way of showing they are in charge, notes Pet Place. Additionally, the unburied waste helps spread pheromones – one of the ways that cats mark their territory. Thus, if your cat leaves their deposits on top of the litter box, they’re using that as a way to make sure you know – and smell – that they are in charge.

At The Cat’s Inn, we can help you take charge – of boarding cats, at least – with several different convenient models of cat condos and townhouses to keep your feline friends in. Check out the different configurations online or give us a call today at 877-228-7466.