Most cat lovers know that catnip is a special treat for cats that often makes them act out of character. For some, they get hyper, others get super affectionate, and some just roll around wherever you sprinkled it. While catnip doesn’t affect all cats – somewhere between 30 and 50 percent of cats have no response to it, depending on who you ask – there’s some interesting science behind what makes cats go wild for this plant. 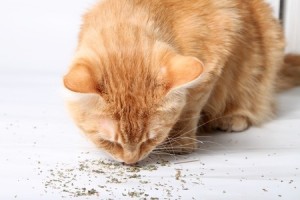 To start, catnip is a naturally growing plant and a member of the same family as mint plants, which is why it’s also known as “catmint” in some places, says Britain’s Daily Mail. If you’ve ever experienced a mint plant, you know that they give off a very noticeable scent, and the same is true of catnip. One of the scents that catnip gives off is something known as nepetalactone, and it is this chemical that is picked up in your cat’s nose and gives him or her a “buzz” from catnip.

Catnip can also be eaten by your cat, however since the effects are generally taken through the cat’s nose, it generally has a minimal effect and even can make cats more mellow instead, notes the Humane Society of the United States. Strangely, catnip also seems to have a limit, with cats generally peaking with their catnip “high” within 10 to 30 minutes and not being affected by more catnip for a few hours afterwards. Afterwards, catnip can usually be introduced anew and elicit the same reactions as before.

Catnip can even affect large cats, according to Vox. In a recent article, the site pointed out that wild cats, including tigers and lions, have been seen reacting to catnip. Check out this great video with some of the large cats saved by Big Cat Rescue as they are exposed to bags of catnip at the organization’s facility.

Scientists have also found catnip has applications for humans as well. It is highly effective as a mosquito repellant for people, for example – more powerful than DEET, but with a short period of effectiveness. It also has some value for people as a tea, used as a sedative and soothing beverage similar to chamomile, says the Humane Society.

Whether for you or your feline friend, catnip is a truly a great plant to keep on hand in your home!