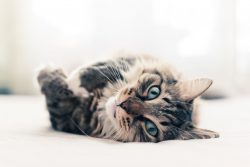 If you’re a lover of all things feline, then you already know a lot about cats. But despite how much you think you know, there are a lot of interesting facts about cats that millions of cat owners don’t actually know!

For example, the fact that cats don’t like cucumbers (don’t ask, just try to put a cucumber behind your cat and see what happens) literally broke the internet with a viral video, almost causing an accidental DDoS attack on social media platforms and YouTube everywhere.

Let’s take a look at some of the other surprising things you may not know about your feline friend in this two-part guide brought to you by My Cats Top Reviews!

Many people have seen a cat panting when it’s overheated just like a dog. This is one of the common ways that animals have to evaporate and cool their bodies, but did you know that a cat can actually sweat through their paws too?

The paw pads are one of the areas where you might see your cat sweating when they walk on smooth surfaces. You may have thought that this is because they were licking their paws before walking on your tile floors, but the truth is that they’re actually cleaning and licking the sweat off of their paw pads!

Most people make the mistake of buying their outdoor cats treats and other items for hairball treatments if they see their cat trying to cough up a hairball. The fact of the matter is that they know how to do this without any help from you! When a cat needs to cough up a hairball, they’ll eat grass to upset their stomach and expel its contents, much like a dog does.

People often try to give their cats a sweet treat, thinking they’ll like it because of the taste. The truth is, they don’t taste anything but wafer and peanuts in that Nutty Buddy you feed them. Cats don’t have sweet taste buds like dogs and humans do.

Crows travel in murders; ducks, geese, and sheep in flocks. Cows and cattle move in herds, but what about a group of cats? They’re actually called a clowder! You can chalk this one up to the fact that a clowder is derived from an Old English phrase that came out of the word “clutter”. In fact, the name started out as cludder, which had the same meaning.

5) Cats are Cleaner than You and Your Dogs

Cats are actually some of the biggest neat freaks in the world! They’ll even get mad and stop using a litter box if they feel that it is too full (even if it isn’t). Cats are extremely finicky about cleaning themselves as well, which is why they do it constantly.

Also, when a cat gives you kisses, it’s actually cleaning you. Consider this an act of affection, because your cat believes that cleanliness is godliness—and they’re sharing that with you!

Can’t get enough of these interesting cat facts? Stay tuned for five more things you didn’t know about cats in our next blog post!

In the meantime, check out the commercial cat housing solutions available at The Cat’s Inn designed to keep cats happy and healthy. Contact us today to learn more!