Naturally you might think that your cat needs space to run around and play. This might even cause you to choose a pet sitter over boarding your kitty. But the truth is they love tight spaces. You may notice them practicing the motto “If I fits, I sits” as they squeeze themselves into a cardboard… Read more »

This is something that a lot of cat owners deal with. One minute you’re sleeping and having an awesome dream about having superpowers, and then the next thing you know you feel your furry feline purring away on your forehead. There are a number of reasons why your kitty might do this. Sharing Scents One… Read more »

The short answer would be yes, but not in the same way you as a human would get jealous. Cats are different they show jealousy because of something that is wrong, maybe insecurity or anger over a situation. When cats exhibit jealousy over another cat or a person it isn’t something that should be encouraged… Read more »

There are times where it seems your cat gets up for the day- just to take another nap. The truth is, your cat isn’t being lazy they just have a very different set of sleeping patterns compared to humans. In an evolutionary light, cats as predators needed a lot of energy to stalk and hunt… Read more »

If you have a kitty friend, you are no stranger to the nighttime wake up calls. You are laughing right now because you know what we mean. Your cat jumps on you in the middle of the night like there was a killer chasing them up the stairs. Or you wake up to their paw… Read more » 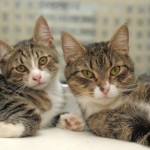 Cats are not like humans and they don’t have the mentality as we do. Humans have a want and a need to be in a group and to socialize, a pack mentality. The same applies to a dog. Just because dogs and humans have pack mentality doesn’t mean a cat does. Cats are a different… Read more »