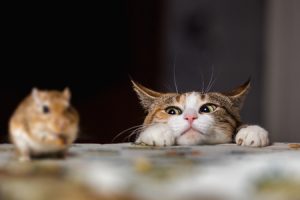 In addition to being great companion pets, cats have long been held in high regard for their ability to control rodent populations as well. Many generations of farmers have relied on their cats’ natural hunting instincts to keep mice and other small pests out of their barns, for example.

But as it turns out, cats might not be nearly as good at policing pest problems as we think they are.

A study that was recently conducted by researchers at Fordham University revealed that cats don’t always serve as an effective deterrent for rats. These researchers spent five months observing the interactions that took place between cats and rats at a waste management facility in Brooklyn, N.Y. During that time period, they found that the cats rarely tried to attack the facility’s rats. In fact, they observed the cats attacking rats on just three occasions, and only two of those attacks resulted in the deaths of rats.

Your cat might think she’s a pretty fearsome hunter, but big city rats can be formidable opponents. If you’re concerned about rat populations around your home, this study suggests that you’re probably better off calling a pest control company rather than trying to put your cat to work.