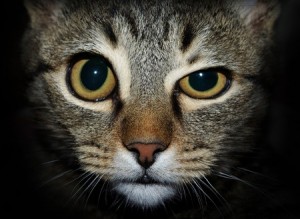 The short answer would be yes, but not in the same way you as a human would get jealous.

Cats are different they show jealousy because of something that is wrong, maybe insecurity or anger over a situation. When cats exhibit jealousy over another cat or a person it isn’t something that should be encouraged or nurtured, instead it should be something you investigate as a cat guardian to find a cure for.

If you notice your cat lashing out at other cats or other humans, that is a problem. Not only can it be a scary situation, but it can be dangerous too. Imagine if your cat hated your roommate or partner and you weren’t around for a few days. Your cat would feel abandoned and start to lash out at the human and even do damage to your home.

Cats that come from broken homes or shelters tend to cling to people more. This is because they do not want to go back to where they came from and they are grateful for where they are now. But this does not excuse their behaviors, and if not taken care of in the beginning it can become increasingly difficult to deal with.