Beyond ghosts and specters, another symbol of the Halloween season is the black cat. A mixed sign of both good and bad luck, black cats mean different things to different cultures depending on the context. For example, here in the U.S., a black cat crossing your path means bad luck is coming, but British and Japanese residents consider that same occurrence to be an omen of good luck. Let’s dig a little deeper in to the history of the black cat’s reputation. 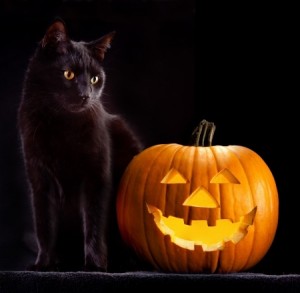 According to Britain’s Express, one of the earliest references available points toward good luck, with ancient Egyptians – the original “cat people” – believing that keeping a black cat was a good way to curry favor with the protector goddess. They were also popular among the Romans, who introduced cats to the European regions during their reign. They were popular with the natives, at first, but that changed as time marched on.

In the Middle Ages, the black cat started to develop a reputation as the companion of witches or even as a transformed version of suspected witches, leading many to kill these cats – and other cat colors and breeds – as part of their quest to rid their communities of evil. However, when the Bubonic plague struck in the 1300s, this mass phobia of cats made things worse. If there had been more cats to catch the rats that spread the plague, it may have been less effective and killed fewer people than the millions who died from the disease. In the colonial era here in the Americas, the black cat’s bad reputation continued among Puritan emigrants, where the black cat was seen as demonic and a potential sign of witchcraft.

During the pirating heyday of the 1700s and 1800s, marauders had an intricate series of superstitious rules about black cats. According to the Express, pirates thought that if a black cat approached, it was bad luck, but if it was walking away, their fortunes would be good. On top of that, if a cat boarded a ship at port and then left, it was said to be an omen that the boat would sink at sea.

At the other end of the spectrum, many cultures believe cats are good luck – or can be. In Germany, for example, they believe that a black cat crossing your path is bad luck only if it’s traveling from right to left. If it’s traveling left to right, good luck is on your horizon, according to American Folklore. The Scots believe that a black cat showing up at a person’s home is a good sign, and people in the English Midlands have a tradition that says giving a black cat as a wedding gift is believed to bring good luck to the new bride. The Japanese culture also associates the black cat with good luck in love, with a single woman who owns a black cat in Japan expected to receive many potential suitors.

With so many conflicting superstitions, it’s hard to say which one to follow. However, owning a black cat – or a calico, or an orange tabby, or a Russian blue – is sure to bring love and affection to a person’s life, if it doesn’t already. At The Cat’s Inn, we offer our unique townhouses for groomers, veterinary offices, boarding facilities and many other organizations in need of convenient homes or temporary locations for their clients’ cats or rescued animals. All townhouses are available in one of 70 colors – including black, if you dare! – and can be made in stackable or side-by-side configurations, as needed. For more information on our cat townhouses, contact us today!